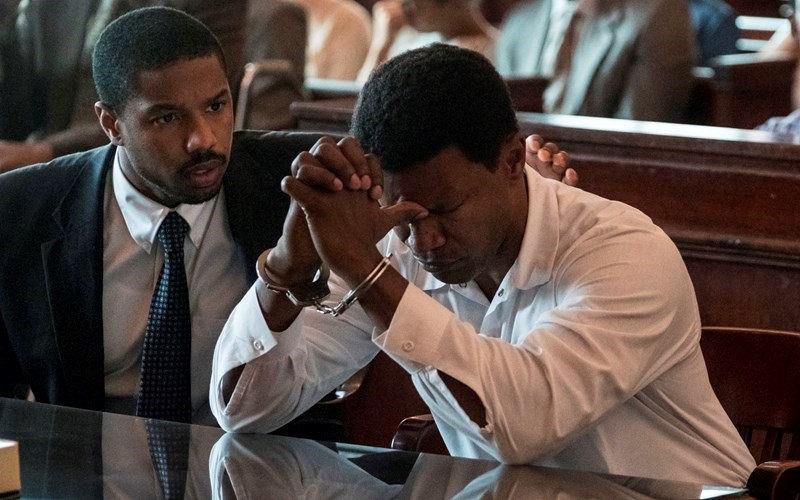 How do we know what justice is? Why do we cry out for it? Why do we have a sense of what ought to be? God has marked us with a knowledge of right and wrong, which leaves us without defense when we live in rebellion to His righteous requirements. Deep down we all know that there is right, and there is wrong. Although we can spend a period of time suppressing the truth, it does not die.

I was recently asked to screen the biopic Just Mercy starring Michael B. Jordan as the young Bryan Stevenson, a Harvard educated attorney who founded the Equal Justice Institute in Montgomery, Alabama. The film is based on Stevenson’s own memoire of his experience taking up the case of death-row inmate, Walter “Johnny D” McMillian.

McMillian, played by Jamie Foxx, was wrongly arrested, imprisoned, and placed on death row for a 1986 murder he didn’t commit. I braced myself for the current offering from Hollywood and culture-at-large: white people bad, black people victims. That’s not what it was. Not at all!

I’ve called for Christians to understand that racism, or more accurately described as partiality based on skin color, is a sin of the heart; it can exist without regard to the color of one’s skin. Unlike common liberal thought, you don’t need power to be racist. Nope, you just need a human heart.

Written and directed by Destin Daniel Cretton (a man who, interestingly to me, was homeschooled by his Christian mother), Just Mercy is measured, and the guilty carefully identified. The film is not an indictment of white people. Nor does it make black men angry just looking for white people to hate. The film depicts real people with real emotion. And yet those emotions seem tempered in a way.

I appreciated that Cretton and Jordan, who stars in as well as produces the film, resisted any temptation to make McMillian better than he was. He was not a perfect man; he was cheating on his wife. I was reminded that we don’t need him to be perfect to care that he was going to die for a murder he didn’t commit. Walter McMillian’s story should be told so that we are reminded that justice matters. His story is an American story. As much as it may pain us to remember some portions of our history, we are what we are because of the combination of all that we were and all that we can become. Part of what makes our nation great is how far we’ve come.

At a time in public discourse where disagreement is injustice and fidelity to Scripture is hate, Just Mercy reminds us that there is a difference. Watching this film, I was reminded that words have meaning, deep significant meaning. Surveying actual injustice make us careful with the label. In a sense, we show respect to people who have really suffered injustice when we resist the urge to carry injustice around in our back pocket like a sticker we’re ready to affix whenever we’re simply unhappy.

The themes of humility, loyalty, and justice are well done. I was moved by the steady flow of the film beginning to end. Again, the villains are clearly defined and the heroes are understated. I’m not sure how Cretton and Jordan did it, but the star of the film is justice.

Your focus is not on the attorney, he is determined yet mild. Your focus is not on McMillian, he is resigned to his place on death row; he has lost his fight. As a result, you’re simply focused on justice. You want justice not for the black man; you want justice for the man – the person made in the image of God. You want the right thing to be done. This is an amazing accomplishment! The film reminded me that justice is still something real.

I, personally, cannot recommend Just Mercy to everyone, nor does AFA endorse it. Its depiction of the execution of a death-row inmate is heavy and disturbing, even though it is not directly shown. The language is very strong in parts – with more than 40 profanities throughout – but it is not completely gratuitous. Although the film is powerful and thought-provoking with some elements of faith woven throughout, I must warn you to be extremely cautious in deciding whether or not to view it. What you see will stay with you. I do believe it will attract attention at the box office, thus my reason for reviewing.

Interestingly, Just Mercy releases at a time when CBS is forced to acknowledge that the most “undercovered story” of 2019 was the consistent action on the part of President Trump and his administration to better the lives of minorities in America. His accomplishments in the area of criminal justice reform, the creation of opportunity zones, and record unemployment numbers within communities of color, secured for Trump the distinction of holding a record that, “almost any president after three years would want to claim, particularly President Obama.”

This article appeared first at The Stand