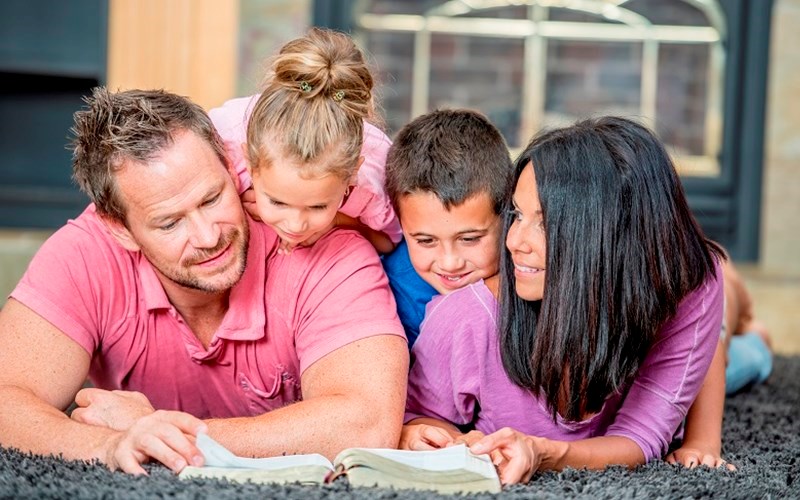 In Old Testament times, people built altars to God to commemorate something He had done. Altars served as a memorial to teach succeeding generations about God and His character. Gathering for a family “altar” or a devotional time is a good way to teach your children about God and His ways.

As you establish your family altar, you will need to build it out of the unmovable rocks of resolution. The reason you have to be resolute is that it will be a battle. You will find that there are many excuses for not having devotions. “Circumstances” will constantly crop up. You may be pressed for time, feel tired, or simply want to catch up on the news of the world. Your kids will occasionally groan when you announce that it’s time for devotions. Perhaps you think you don’t have the ability to teach the Bible. As you face distractions of various kinds, keep in mind one very powerful reason for daily devotions: the eternal salvation of your children.

Here are some practical points to consider when establishing a family altar.

Begin devotions by thanking God for your family and then prayerfully asking Him, “Open my eyes, that I may see wondrous things from Your law” (Psalm 119:18). The Bible uses the phrase “the Law” to refer at different times to the entire Word of God, the Law of Moses, and the Ten Commandments. The Ten Commandments are the very backbone of Holy Scripture. We must seek the help of God’s Holy Spirit if we are to comprehend the incredible things God has in His Law. The apostle Paul said, “I delight in the law of God” (Romans 7:22). Why should we delight in God’s Law, even though we are not saved by our obedience to it? It is because the Law reveals God’s holiness, His righteousness, His justice and truth. It is the very instrument that the Holy Spirit uses to convert the soul (Psalm 19:7). It is the means by which the way to the sinner’s heart is prepared to receive the grace of God. If we want our children to be truly converted, we must first know the wondrous things from His Law, and that comes only by prayer and revelation of the Holy Spirit.

Read the Bible Out Loud

The Bible says, “A servant of the Lord must…be able to teach” (2 Timothy 2:24). So if you’re worried about a lack of teaching ability, don’t say, “I can’t teach”; say, “Success comes in cans.” Memorize this promise from Scripture: “I can do all things through Christ who strengthens me” (Philippians 4:13).

Simply start by reading five verses from one of the Gospels. Then have each family member read five verses; this will not only help them become more confident in reading out loud but will help them remain attentive. Pause now and then to ask what they think a particular verse means. Be ready for (and don’t be discouraged by) a regular “I dunno.” Tell your children what you think the verse means, and continue with the reading, making use of any Bible cross-references.

If you have young children, start with a “picture” Bible. I did this many years ago when I found a Bible full of beautiful pictures of Adam and Eve, Noah’s ark, David and Goliath, etc. But when I turned to the New Testament, I found a picture of King Herod being presented with John the Baptist’s head on a plate! John’s eyes were vacantly staring into space, and his mouth was gaping open! It was horrible. So, I took some crayons, and (God forgive me) I changed John the Baptist’s head into a birthday cake. For years my kids must have been mystified about why King Herod’s guests were so horrified at the sight of a cake.

This is not a time to worry about your dignity. Role-play with your kids when they are small. Be Goliath, and give each of them a turn at being David. Have them throw a pillow or other object at you, then fall down when you get hit. Act out Daniel in the lion’s den. Be a lion and roar. Play out Bible stories with your children whenever you can. It will help them retain the principles behind the story.

Use the time when they are young and impressionable to impress upon them eternal biblical truths. I was deeply into role-playing until one memorable day: as I was rolling around on the floor doing something incredibly funny, I looked up and saw that none of my children were even cracking a smile. They were looking down at me as though I was some kind of nut. It was then that I realized they were no longer impressed. The “impressionable years” had gone.

So that the devotional time doesn’t seem like a drag, don’t make it too long. Keep it around 10 to 15, perhaps 20 minutes. In fact, if you stop devotions when the kids are having a good time, this will make them look forward to the next time.

From the Scripture passage you read, select a memory verse and have your kids repeat it together six times. Perhaps you could have them write memory verses in a special book, and review them regularly. Repeat the same verse each night during the week. If they remember it at the end of the week, give them some sort of reward (we often gave our kids a small amount of candy). The reward is important. We all need incentives in life, and candy is a good one. I learned that children speak a special language called Candy, and if I wanted to communicate with them I could do so by speaking their language.

So, be liberal when it comes to sweets. If you are worried about rotting your kids’ teeth, have them brush after they have consumed their reward. If you are concerned about them becoming obese, make sure they eat only the candy you give them. And the reward doesn’t have to be a big candy bar. A few jelly beans (the candy of presidents) can be just as rewarding to a child. This is for the most important of issues—their eternal salvation. So think about the fact that there will be plenty of healthy, fit, fine-teethed folks who will end up in hell.

Use Anecdotes and Humor

If you want to keep the attention of your children, thoroughly flavor the reading with anecdotes. It is said of the Messiah, “I will open my mouth in a parable” (Psalm 78:2). Jesus often used parables—stories that carried a deeper meaning. We must do the same. Make them short, and preferably humorous.

Many people thank me for using humor when I teach, but occasionally someone will criticize this approach, asking me to justify it from a biblical perspective. One man wrote to say that “this is foolish jesting,” which God aligns with “fornication, uncleanness, covetousness, and filthiness.” He stated that Jesus didn’t tell jokes, so we shouldn’t either. Many years ago I did wonder if it was legitimate to use humor, and was delighted to find a quote by “The Prince of Preachers,” Charles Spurgeon (my favorite preacher). He said that the use of humor in a sermon is like a flash of lightning on a dark night. It makes people sit up and wait for the next flash.

After I spoke at a church meeting, an excited woman approached me to say that her husband hadn’t been to church for seven years, and that the last sermon he sat through was by what he called a “hell-fire” preacher. She added, “When you started, he said, ‘Here we go again—another hell-fire preacher. I’m outta here.’ But then you made him laugh, and he stayed for the whole sermon…and put his hand up at the end [indicating he made a commitment to Christ].”

Using humor in your family devotions keeps the attention of your children so you can convey timeless truths.

New Zealand doesn’t have crows or mockingbirds. For our first year or so in the US, we were fascinated by the different birdcalls we heard in California. One day while working in the yard, I stopped to listen to the variety of songs. One, in particular, gripped my ears. I stood there captivated by the sound, thinking, I bet Californians call it a “phone bird.” It sounds exactly like a phone ringing.

Suddenly it dawned on me—it was the phone ringing! I missed the caller.

Notice that it was only when my understanding was right that the result was action. The night of my conversion, when my understanding was right, it resulted in action. My realization that I had sinned against a holy God led me to repent and place my faith in Jesus. “Faith comes by hearing [i.e., a right belief or understanding], and hearing by the word of God” (Romans 10:17). As my own children heard the Word of God—and as they understood God’s holiness, His justice, His truth, His righteousness, His love, and His faithfulness—they acted upon the Word by exercising saving faith, and came to know the salvation of God.

Now, commit yourself to having a family altar with your children. Do it as “a living sacrifice, holy, acceptable to God, which is your reasonable service” (Romans 12:1).

Remember to close the family devotions in prayer, asking God to help you and your family to remember—and act upon—the lessons you have learned.

Adapted from How to Bring Your Children to Christ…& Keep Them There.

This was originally published here.  Ray Comfort is the Founder and CEO of Living Waters and a bestselling author of over 80 books including The Evidence Bible, God Has a Wonderful Plan for Your Life, and How to Know God Exists.  He co-hosts the award-winning television program “Way of the Master” which tackles some of the toughest questions about God, the Bible, and hot topics skeptics and believers wrestle with in life.  He is married to Sue, has three grown children, and hasn’t left their house without gospel tracts for decades.  Other blogs and articles by Ray can be found here.

Register for our the AFA Marriage Family Life Conference here:https://marriagefamilylife.ticketleap.com/marriage-family-life-conference-2020/details